Creator
Wienerberger, Alexander, 1891-1955, Photographer
Media Type
Image
Text
Item Types
Photographs
Photograph albums
Description
Several children sit on a pile of rocks. The rock pile looks like construction debris against a tall wooden fence, and in the foreground a set of train tracks is visible. One of the photo captions reads that these homeless children (or bezprizornye, as known in Russian) are delousing themselves, which actually is not apparent on close inspection, though certainly possible. The boy on the right appears to be lost in thought; another, dozing off. They are both barefoot, though warmly dressed. A young girl sits near the fence while another bundled up child, its back to the photographer, rests its head on the young girl’s lap.

This shot may be in the vicinity of the photograph seen in PD110, http://vitacollections.ca/HREC-holodomorphotodirectory/3636296/data - where a disabled man is making his way across train tracks to a similar pile of stone rubble near a wooden fence. Perhaps this was an area where some of the homeless congregated in Kharkiv. 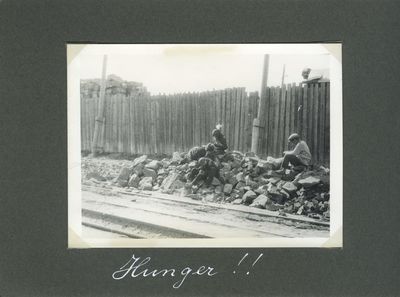