Nikolai Bokan: a Biographical Essay
Main Menu → Previous Panel → Next Panel
The Trial
Panels
IntroductionThe Criminal Case FileThe TrialThe Bokan FamilyNikolai Bokan's Life Pre-FamineFamine (1932-33)TolstoyanismPhotography
Links
View the "Nikolai Bokan Collection"
Photos figured prominently as evidence against Nikolai and Boris during their trial in the spring of 1938. The indictment of April 9th concludes that Nikolai and Boris were involved in anti-Soviet agitation and distributed photos of a provocative and anti-Soviet character. They were also accused of opposing collectivization, and discouraging their fellow citizens from service in the Red Army and paying taxes. Nikolai was also accused of membership in the “counter-revolutionary Tolstoy sect” and for refusing to recognize the legitimacy of the Soviet government.
The official sentence was delivered by the Chernihiv Regional Court in April 1938, and was upheld on appeal by the Supreme Court of the Ukrainian SSR on September 29, 1938. Nikolai was sentenced to eight years of hard labour in Yagrinlag, and Boris, to five years in Sevvostlag (an acronym in Russian for “North-Eastern Corrective Labor Camps”). Again, the photos figured in the official sentence, which stated that Nikolai “aspired to illustrate life in the USSR in a counter-revolutionary way through photos of a religious-anti-Soviet character.”
During the trial, Nikolai refuted the accusation regarding the distribution of photos. It is evident from other sources in the file, however, that he indeed shared them with others in the surrounding region, and even dispatched his children as part of these efforts. In his appeal, Boris expressed his regret for refusing to join the Soviet Army and blamed his father for his negative influence.
An inventory found among the trial documents indicates that 42 photos and 20 negatives were confiscated. This contrasts with the 27 individual photos included in the case file. Notably, the Chernihiv region NKVD representative ordered the destruction of 30 confiscated photos and negatives, along with 63 of Nikolai’s books. It is assumed that the negatives were destroyed accordingly, as none are included in the case file. Given the sensitive nature of the photos that have survived, it is likely that those selected for destruction portrayed events the Soviet authorities were determined to hide. 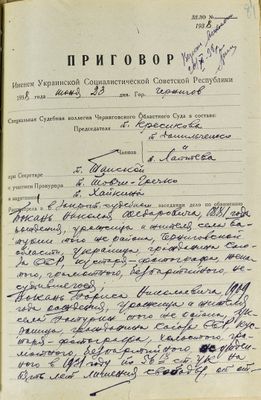 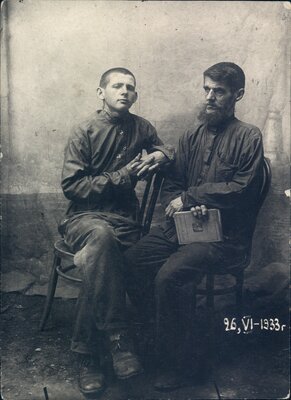