Nikolai Bokan: a Biographical Essay
Main Menu → Previous Panel → Next Panel
Nikolai Bokan's Life Pre-Famine
Panels
IntroductionThe Criminal Case FileThe TrialThe Bokan FamilyNikolai Bokan's Life Pre-FamineFamine (1932-33)TolstoyanismPhotography
Links
View the "Nikolai Bokan Collection"
Nikolai Fedorovich Bokan was born on April 4, 1881, in Baturyn, Chernihiv oblast. Nikolai’s trial documents indicate that he was a peasant, although in his memoir he considers himself a member of the intelligentsia. Nikolai claims that his father was a Cossak who had held various positions in the local government. He owned land, a part of which he rented, though he never worked the land himself. Nikolai claims that his mother was bourgeois, the daughter of a wealthy craftsman from Konotop (near Baturyn), who made sheep coats and hired laborers to assist in his workshop.
Nikolai was orphaned before the age of ten, his mother having died in childbirth, and his father soon after from a sickness compounded by his alcoholism. In his memoir, Nikolai indicates feeling a sense of relief upon the death of his father, who had subjected his family to violent abuse. Nikolai was one of six siblings left orphaned, most of whom lived with an aunt after their father’s death.
In 1894, Nikolai briefly took on work at a local store before its bankruptcy, and subsequently left Baturyn to find work elsewhere. For the next decade, he worked at various jobs in towns in the Kuban and across contemporary south-eastern and southern Ukraine (then part of the Russian Empire), including Tahanrih, Katerynodar, Novorossisk, and Odesa. Notably, at the time of Nikolai’s visits, the cities in the Kuban were largely populated by ethnic Ukrainians. Many of Nikolai’s jobs appear to have been obtained through friends and networks of acquaintances from Baturyn and generally involved sales or clerical work.
Nikolai returned to his native Baturyn around 1902. He had inherited land and considered taking up farming, but eventually decided against it. Instead, he resolved to pursue a career as a photographer and purchased photography equipment with a portion of the profits from the sale of his property. It is unknown whether Nikolai received formal training in photography or whether he was self-taught. He also used some of his inheritance to acquire a collection of books – primarily religious and philosophical writings – believing that education would show him the “true path.”
It is unclear precisely when Nikolai began his photography business, although a photo dated 1914 features a signboard outside of the Bokan family residence that reads “Photographer N. F. Bokan.” Nikolai had a photo studio in his apartment at this time.
Nikolai married Vasilina in a church wedding in 1905. It is unknown when or how they met, though she is presumed to have been a local of Baturyn or the surrounding regions. Between 1906-1919, Vasilina and Nikolai had seven children – Nikolai (Jr.), Vladimir, Boris, Konstantin, Lev-Leonid, Alexandr, and Anna.
In 1916, Nikolai was conscripted into the Red Army as a military photographer and was deployed to Romania in March 1917. He was relieved to have been assigned the post, as the role limited his handling of weaponry and allowed him to adhere at least in some sense to his pacifist leanings. He resigned from service soon after the establishment of Bolshevik rule.
Amidst the turmoil of the ensuing civil war, Nikolai’s anarchic sentiments drew the attention of various forces sweeping through the Baturyn region vying to establish their authority. He seems to have been imprisoned by both Denikin regiments and Bolsheviks, although the details are unclear.
In his memoir, Nikolai stated that in the immediate postwar years, the Bokan family struggled to survive. They experienced their first bout of poverty, with no money to buy new clothing or to maintain cleanliness. Notably, this period coincided with the famine in Soviet Ukraine of the early 1920s.
Around 1923, the Bokan family left Baturyn to seek better opportunities in Kyiv and then Odesa. They encountered further hardships, struggled to find employment, and regretted their decision to move. In his memoir, Nikolai lamented that Odesa had become a city of “destruction, need, and ruin,” so different from the “prosperous and cultured” city he remembered from his youth.
Upon their return to the Baturyn region in 1925, Nikolai attained a handful of photography commissions that paid the bare minimum the family needed to survive. The Bokan family frequently moved during this period, having encountered difficulty finding accommodations or securing land on which to build a home. It appears that by 1928, they permanently settled in a homestead on the outskirts of Baturyn, where they were to live out the famine years. The accommodation was humble and contained a studio in which Nikolai produced photos, both commissioned by inhabitants in the region and those taken for personal purposes. It is around this time that Nikolai’s son Boris began apprenticing with his father. Although business appears to have been relatively steady, Nikolai continued to struggle to provide for his family in the years leading up to the famine of 1932-33. 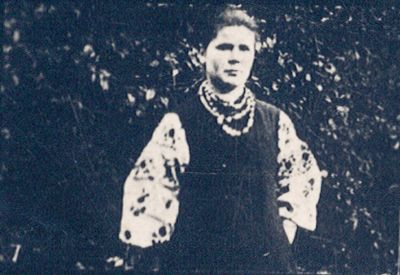 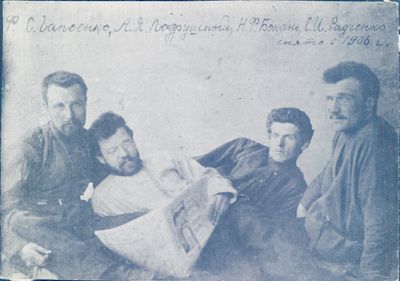 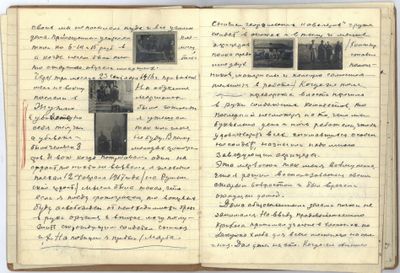 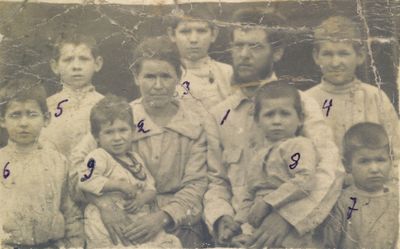 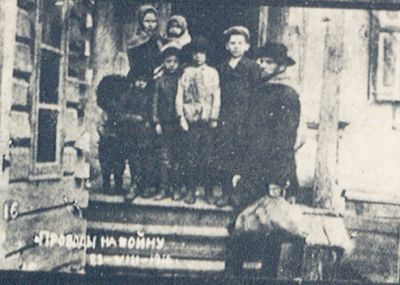 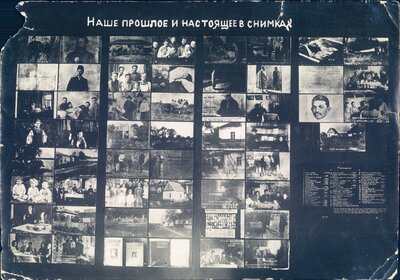 Photo Display Board: "Our Past and Present in Photos" Details
Main Menu → Previous Panel → Next Panel
Powered by / Alimenté par