Nikolai Bokan: a Biographical Essay
Main Menu → Previous Panel
Photography
Panels
IntroductionThe Criminal Case FileThe TrialThe Bokan FamilyNikolai Bokan's Life Pre-FamineFamine (1932-33)TolstoyanismPhotography
Links
View the "Nikolai Bokan Collection"
Nikolai was a self-employed photographer, having begun his career in the early 1900s. He acquired photographic equipment from profits attained through the sale of inherited property. It is unknown whether Nikolai received formal training in photography or whether he was self-taught. Nikolai catered to local clients in Baturyn region and developed his photos with equipment kept in his home. It is unclear precisely when Nikolai began his photography business, although a photo dated 1914 features a signboard outside of the Bokan family residence that reads “Photographer N. F. Bokan.” Nikolai had a photo studio in his apartment at this time.
In 1916, Nikolai was conscripted into the Red Army as a military photographer and was deployed to Romania in March 1917. He was relieved to have been assigned the post, as the role limited his handling of weaponry and allowed him to adhere at least in some sense to his pacifist leanings. The commander of the regiment provided him with necessary equipment, assigned him two assistants, and granted him relative independence regarding his photographic subject matter. As such, Nikolai claims to have been inclined to capture photos of the soldiers’ everyday routines in the trenches. Upon the establishment of Bolshevik rule, oversight of Nikolai’s work tightened. He resigned from his post, citing his age, although he claims in his memoir that the resignation was largely driven by the increased restrictions on his work.
In the early 1920s, Nikolai moved his family to Kyiv and then Odesa in search of new opportunities, but returned to the Baturyn region in 1925 after encountering a succession of adverse circumstances. Nikolai attained a handful of photography commissions that paid the bare minimum the family needed to survive. At one point, when the family resided on a farm in Shchelkovytsia, Nikolai appears to have been in competition for clients with another local photographer. Nikolai claimed that his rival had a more prosperous business because he carried out client requests to retouch photos, a technique Nikolai refused to implement, although it is unclear whether he did so on principle or lacked the requisite skills. Among Nikolai’s surviving photos are those that document his family’s experience of the Holodomor, and notably the death of one of his sons from starvation. The photos included in the "Nikolai Bokan Collection" offer a uniquely personal perspective on the experience of famine and speak to the famine’s devastating impact on family dynamics amid broader social and political transformations. As Nikolai was a devoted member of the Tolstoyan movement, which was based on the religious and political writings of Leo Tolstoy, his writings and photos also provide insight into the fate of religious groups amid Soviet-era repressions.
In addition to individual photos, the case file also contains photo display boards created by Nikolai between 1931-1936. The display boards are compilations of photos together with inscriptions that offer narratives about the life of the Bokan family and commentaries on broader societal developments. Nikolai is known to have prepared these boards for dissemination, sharing them with others in the surrounding region, and even dispatching his children as part of these efforts. The appearance of display boards as photos on others indicates that copies were produced, although the extent to which this was done is unknown. The boards’ reception among Nikolai’s acquaintances is unknown, although the boards and the photographs figured prominently in his trial as evidence of his engagement in anti-Soviet propaganda. Little is known about Nikolai Bokan’s photography equipment, though a photo of equipment captured in the early 1930s and included in the case file offers some insights. The model was likely the Fotokor-1 produced by the “State Optical and Mechanical Plant” (“GOMZ”) in Leningrad. The model of the plate folding camera was produced between 1930 and 1940, and was the most mass-produced Soviet camera of the interwar era, with a circulation of over 1 million items. The standard size of the photo paper sheets used for the camera was 9X12. Nikolai likely obtained much of his equipment from Kyiv. The case file includes an envelope for photography paper produced at a Kyiv factory. 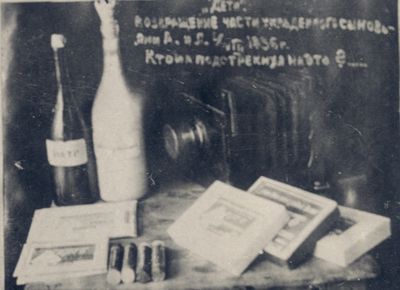 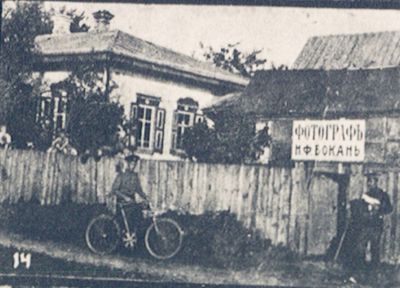 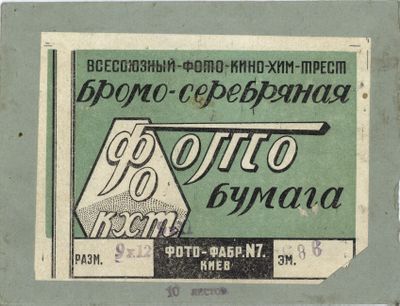 Envelope for the photo paper used by Nikolai Bokan Details 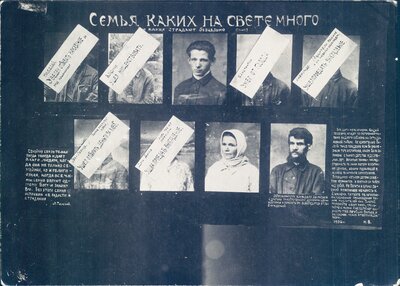 Photo Display Board: “A family like many others in the world, suffering senselessly.” Details
Main Menu → Previous Panel
Powered by / Alimenté par