Creator
Bokan, Nikolai, 1881-1942, Photographer
Media Type
Image
Text
Item Type
Photographs
Description
A photo display board created by Nikolai Bokan in 1936. The display board features photos of five of Bokan’s seven children and brief descriptions about their estrangement from their father. Also featured are photographs that capture the consequences of his children’s defiant actions against him, notably for his insistence that they embrace Christianity (see "Inscription Details" for more information).

Among the photos is one featuring the corpse of Konstantin Bokan lying in a coffin. In the text below the photo, Bokan attributes his death to starvation. He notes that shortly before his death, Konstantin had become involved with a “non-thinking crowd,” referring to anti-religious and pro-Soviet circles.

Konstantin died of starvation in June 1933. In the few months prior to his death, he had been working on a collective farm where he was overworked and poorly fed. He had left his family home earlier in the spring of 1933, as his parents were struggling to provide for their large family during the famine. It is unclear whether Konstantin was asked to leave or whether he left of his own accord. Konstantin would have been around twenty-two years old at the time of his departure from the family home.

The board also features a photo of Nikolai Bokan’s son Vladimir leaving the family home in 1932. In the inscription below the photo, Nikolai states that Vladimir was forced to leave on account of the famine. An adjacent photo depicts a broken window in the Bokan family home. The corresponding text explains that the windowpanes were broken one night by Vladimir, who was aggrieved by his forced departure. It further states that upon leaving the family home, Vladimir had resorted to beggary, extortion, and hooliganism. Vladimir was likely twenty-three years old when he was asked to leave the family home.

It is apparent from the display board that at least from Nikolai Bokan’s perspective, the tensions between him and his children were largely rooted in disagreements about religion. Bokan perceives their estrangement not as a personal affront, but as being prompted by their aversion to Christianity. Bokan also mentions the influence of his “non-religious” wife, Vasilina, on their children. From Bokan’s memoir, we know that though Vasilina was a Christian, Bokan believed that she blindly followed religious tradition and the teachings of a corrupt clergy without attempting to attain religious or spiritual enlightenment. In line with Tolstoyan views, Bokan perceived spiritual enlightenment and religious adherence as intellectual endeavors, and regretted that his children’s aversion to religion distanced them from intellectual engagement.

These dynamics within the Bokan family occurred amid widespread anti-religious sentiment propagated by Soviet authorities beginning in the late 1920s as a means of disseminating atheism and promoting loyalty to the state. These anti-religious campaigns coincided with the beginning of the forced mass collectivization of agriculture.
Inscriptions
A transcription of the Russian text and English translation are available in the "Inscription Details" document on the right-hand side of the screen.
Image Dimensions
Image Width: 14.5cm
Image Height: 9.5cm 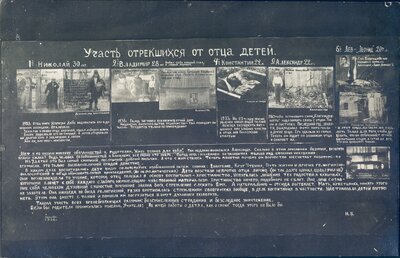