Creator
Wienerberger, Alexander, 1891-1955, Photographer
Media Type
Image
Text
Item Types
Photographs
Photograph albums
Description
A man most likely from the countryside, lies dead on the edge of a curb. He is barefoot, destitute. The location appears to be near or within a market area, but the vendors’ windows are shuttered. The large sign above the nearest set reads in Ukrainian “ваги” translated as “scales”: a place where goods can be weighed for proper payment. At this moment, some of the passersby show interest in the victim; others don’t, or have already noticed, and now have turned away. A man holds the hand of a young boy who looks straight ahead as they walk past.
One man looks directly at the photographer. We do not know whether he is showing simple curiosity or whether he is expressing his concern for the victim to the photographer. Or, because photography of death, poverty, and so many other subjects was strictly forbidden, the man may have been signalling disapproval or a warning to Wienerberger. 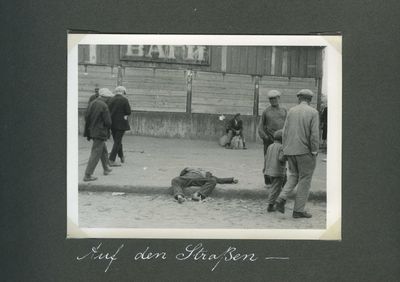