Creator
unknown, Photographer
Media Type
Image
Text
Item Type
Photographs
Description
One of a series of photographs depicting famine conditions in Ukraine that the Ukrainian Red Cross sent abroad in 1921-1922 to various charitable organizations and to the Ukrainian diaspora press; they did not appear in the Canadian press, although the photos were mentioned. (Serbyn 1992, p. 675.)
These photographs were also mailed to the relief organization, Union international de secours aux enfants with a separate listing of the pictures in an official envelope date-stamped as arriving in Geneva on May 5, 1922.

In 1921, the normally abundant southern steppe areas of Ukraine were suffering from drought and resulting starvation as severe as in the Volga regions of Russia. In spite of this, the Bolsheviks in Moscow requisitioned the harvests from throughout Ukraine to feed the starving populations of Russia’s agricultural regions. The dire conditions in the Ukrainian steppes were further compounded as large numbers of migrants from Russia’s famine zones arrived, expecting to find plentiful sustenance.

This is #14 of 17 photographs that were mailed by the Ukrainian Red Cross with a separate numbered list in an official envelope date-stamped as arriving in Geneva on May 5, 1922. They are now housed among the documents of the "Union international de secours aux enfants" in the Canton Archives of Geneva, Switzerland.


Also available for viewing and download, with limitations, from the International Committee of the Red Cross, Audiovisual Archives: https://avarchives.icrc.org/Picture/9380.
(The location is incorrectly stated as Bardiansk, Russia)


Misattributed in the 1930s as documentation of the Holodomor in: 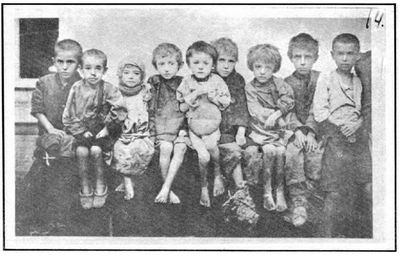