Creator
Williams, Whiting, 1878-1975, Photographer
Media Type
Image
Text
Item Types
Photographs
Newspaper illustrations
Description
Several women, men and a child look with concern at the body of a very young girl lying with her bare feet over the curb. Williams states that the child is dead. The setting is a city bridge with a busy sidewalk alongside the road. One of the women looking at the child holds a teakettle in her hand, while another appears to be looking quizzically at the photographer. Barely visible in the background are a couple of men in some kind of uniform.

In the Answers version, the setting is cropped out, and considerable liberty was taken by the photo editor in enhancing the outlines of the subjects, as well as creating a bare right foot for the woman in the foreground - whereas the original shows both feet in shoes.

As famine conditions in Ukraine became ever more severe in the 1930’s, the numbers of homeless youth increased dramatically. Starving parents from the countryside sometimes dropped off their children in urban areas in the desperate hope that they had a better chance for survival there. Perhaps they might be taken in by a kind stranger or an orphanage. Older children sometimes left their dead or dying families in the villages of their own accord, also in the hope of finding a means to stay alive in the city.

The situation was particularly acute in Kharkiv. Officials report 9,000 children picked up off the streets in one week alone in May, 1933. There were not enough provisions in the overcrowded orphanages, where the death rate was 30% and higher from disease and starvation. Conditions were so appalling that more able-bodied children often escaped to return to a chance for survival in the streets.

This photo was later published with the first of 2 articles by Whiting Williams in a London weekly titled Answers: “My Journey Through Famine-Stricken Russia,” February 24, 1934, p.16.

The original photograph and the published version are both shown.

Inscriptions
Caption on the back of the photograph: “A little victim of Russian hunger.”
Caption under the photo in Answers: "“Factory women passing a tiny victim of famine: a dead child lying on a pavement in Kharkov.” 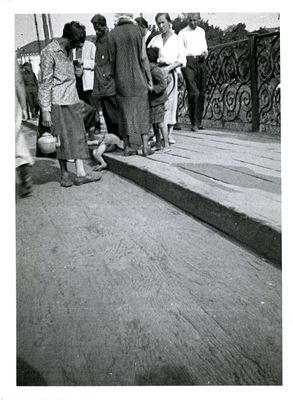