In the original photo, judging from where some of the boys and some of the people on the street are directing their attention, it appears that the police cart may have stopped to pick up more children.

The situation was particularly acute in Kharkiv. Officials report 9,000 children picked up off the streets in one week alone in May, 1933. There were not enough provisions in the overcrowded orphanages, where the death rate was 30% and higher from disease and starvation. Conditions were so appalling that more able-bodied children often escaped to return to a chance for survival in the streets. Accounts of witnesses also report that sometimes children were housed in railcars in unspeakable conditions, or as stated in Williams’ article, simply carted off to an open space in the countryside, where they were left to fend for themselves.
Notes
Photo taken August, 1933.

This photo was later published with the first of 2 articles by Whiting Williams in a London weekly titled Answers: “My Journey Through Famine-Stricken Russia,” February 24, 1934, p.17.

The original photograph and the published version are both shown.

Inscriptions
Caption on back of photograph: “The wagon of the boy-catcher – gathering up some of the 18,000 boys reported left last winter in Kharkov by their parents.”

Caption under photo in Answers: “Police carts gathering up abandoned and starving children at Kharkov.”

Terms of Use
Reproduction of images is restricted to fair use for personal study or research. Any other use requires a contractual agreement with the Western Reserve Historical Society, Cleveland, OH. Contact the Society directly at:
https://www.wrhs.org/research/library/services/ 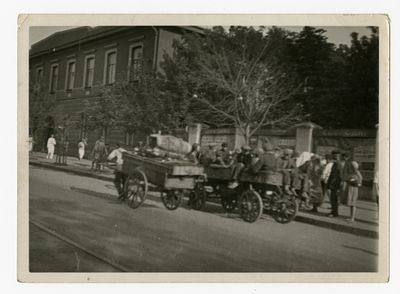