Creator
Williams, Whiting, 1878-1975, Photographer
Media Type
Image
Text
Item Types
Photographs
Newspaper illustrations
Description
In the original photograph, Williams presents a glimpse of Horlivka, the major center for coal mining in the “Donbas”. According to the article caption, the men and a woman are on their way to work. The older man in the foreground is carrying his own lantern that he will take with him into the mines. The men’s trousers appear very tattered. The woman’s skirt is frayed, and her left leg appears stained. It looks like she is carrying a book or ledger. Perhaps she is employed as a bookkeeper in a mine office.

In the illustration as presented in Answers, the woman, the male worker in the mid foreground, and much of the industrial setting behind them are cropped out.

This photo was later published with the first of 2 articles by Whiting Williams in a London weekly titled Answers: “My Journey Through Famine-Stricken Russia,” February 24, 1934, p.17.

The original photograph and the published version are both shown here.

Caption under photo in Answers: “Miners going to work in the Donetz coalfield. Although manual workers are given preferential treatment, their conditions are often desperate.” 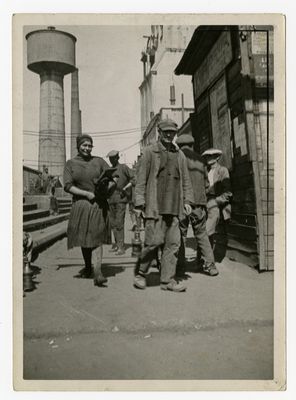