Creator
Williams, Whiting, 1878-1975, Photographer
Media Type
Image
Text
Item Types
Photographs
Newspaper illustrations
Description
Williams shows us two women workers on his escorted tour of a construction site for the new aluminum production plant seen in the background. Both pause to look at Williams, one flashing him a smile. These women are wearing ordinary street clothes, but heavy work boots to protect their feet. The goggles they were issued to protect their eyes are pushed up on to their headscarves. In Soviet iconography, strong, happy women workers were a prominent theme to show progressiveness in gender equality. Women were also much more likely to be depicted with work goggles than men, perhaps to portray particular concern for the work safety of women.

As a US consultant on labor management issues in heavy industry, Williams was critical of some of the types and conditions of heavy labor that women in the USSR were allowed to participate in.

The cropping by the photo editor of Answers not only brings us closer to the subjects, but presents a much more orderly setting by removing the disarray of the construction site and an electrical tower near one of the buildings.

This photo was later published with the second of 2 articles by Whiting Williams in a London weekly titled Answers: Williams, Whiting. “Why Russia is Hungry,” March 3, 1934, p.3.

The original photograph and the published version are both shown here.


Inscriptions
Caption on back of original photograph: “Workers helping to build the aluminium and other plants in Dnieprostroy to use ‘juice’ ready years in advance!”

Caption under photo in Answers: “Helping to build an aluminium plant in Dnieprostroy, where great works of various kinds are under construction. Electric power for them to use has been ready years in advance.” 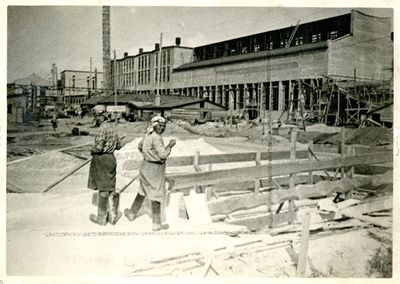