Creator
Williams, Whiting, 1878-1975, Photographer
Media Type
Image
Text
Item Types
Photographs
Newspaper illustrations
Description
Williams shows a crowded, open air, railway “commuter” service for workers employed in constructing new industrial sites in the vicinity of the massisve new Dnipro Hydroelectric Dam - often referred to as Dnieprostroy - in Zaporizhia. The transport operated on the shift schedule and it is not stated where the passengers were allowed to disembark.

No record of publication found to date.

Inscriptions
Caption on back of photograph: “Workers returning from a suburb of Dnieprostroy where aluminum, coke, and other plants are building.” 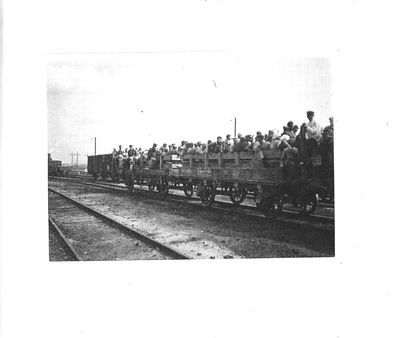