Home (Advanced) → What's New → Details
Non-Holodomor: A youth crazed with hunger sits in a basin in a Ukrainian village
Description

Creator
unknown, Photographer
Media Type
Image
Text
Item Types
Photographs
Pamphlet illustrations
Description
This is one of a set of 20 photographs that illustrate La Famine en Ukraine, rapport, by Vidkun Quisling, April 30, 1922, described in the notes below. The photographs are housed among the documents of the "Union international de secours aux enfants" deposited in the Canton Archives of Geneva. Another nearly identical series of 17 photographs depicting famine conditions in Ukraine are also deposited at the Canton Archives. The latter photographs were in the possession of the Ukrainian Red Cross and sent abroad in 1921-1922 to various charitable organizations and to the Ukrainian diaspora press.

This photo appears as #7 of 17 photographs that were mailed by the Ukrainian Red Cross with a separate numbered list in an official envelope date-stamped as arriving in Geneva on May 5, 1922. They are now housed among the documents of the "Union international de secours aux enfants" deposited in the Canton Archives of Geneva, Switzerland. (Serbyn 1992.)
Listed as: #7: "Хлопець села Благовіщенка Іляріон Нищенко, що через голод убив свого З-літнього брата і з'їв його." "Un garçon de Blahovichtchenka qui avait tué et mangé son petit frère (gubernia de Zaporijia)." [A boy from Blahovishchenka who killed and ate his brother (gubernia of Zaporizhia ).]


Also available for viewing and download, with limitations, from the International Committee of the Red Cross, Audiovisual Archives, https://avarchives.icrc.org/Picture/9384
Location misidentified as Russia. 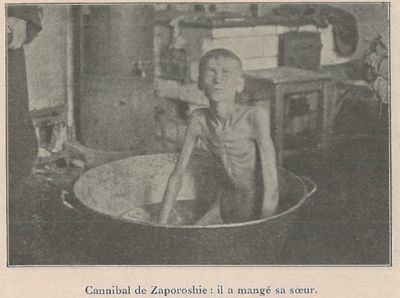