Creator
Wienerberger, Alexander, 1891-1955, Photographer
Media Type
Image
Text
Item Types
Book illustrations
Photographs
Pamphlet illustrations
Description
In a location that appears to be somewhat sheltered from the view of passersby, Wienerberger focuses on two children in the foreground. One is looking at the camera, while the younger boy stares off in another direction. The gaunt child looking at the camera has very short hair and is not wearing the typical traditional headscarf worn by girls and women; however, she is wearing a skirt and a shawl. A barefoot woman near them with her back to the camera appears to be sleeping. Possibly this is a homeless family who left their starving village, rather than strictly abandoned children - “bezprizornye” as the caption to the published photo states. Another homeless person can be seen lying further in the background.

As famine conditions in Ukraine became ever more severe in the 1930’s, the numbers of homeless youth increased dramatically. Starving parents from the countryside sometimes dropped off their children in urban areas in the desperate hope that they had a better chance for survival there. Perhaps they might be taken in by a kind stranger or an orphanage. Older children sometimes left their dead or dying families in the villages of their own accord, also in the hope of finding a means to stay alive in the city.

Formidable obstacles awaited them in a large overcrowded city such as Kharkiv, whose population had nearly doubled between 1920-1933. Officially, Ukraine’s rural residents were now considered illegal aliens in the cities, and as illegals without close family or friends in the city, it would be almost impossible to find a place to stay, and by law, no public shelters were available. Most ended up sleeping and congregating in vacant lots or simply along streets and sidewalks. The weakened, impoverished migrants living in such unsanitary conditions were susceptible to often fatal diseases carried by lice or caused by unclean drinking water. Older homeless children tended to band together, begging, scrounging for scraps, and stealing to survive. Prostitution was not uncommon.

Homelessness among children was particularly acute in Kharkiv. Officials report 9,000 children picked up off the streets in one week alone in May, 1933. There were not enough provisions in the overcrowded orphanages, where the death rate was 30% and higher from disease and starvation. Conditions were so appalling that more able-bodied children often escaped to return to a chance for survival in the streets. 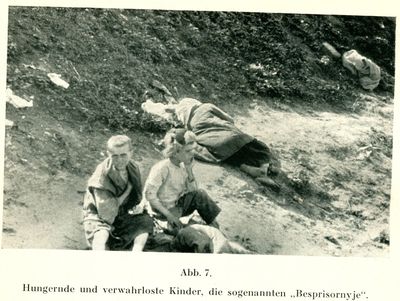 Version from: Brüder in Not
Groups of Related Records