Creator
Wienerberger, Alexander, 1891-1955, Photographer
Media Type
Image
Text
Item Types
Book illustrations
Photographs
Description
A teen-aged boy most likely from the countryside is shown begging in a busy urban setting. He looks exhausted and destitute in his tattered coat and trousers. What he owns is likely what he is wearing. Note that the people visible in the background are more lightly dressed than he is.

The situation was particularly acute in Kharkiv. Officials report 9,000 children picked up off the streets in one week alone in May, 1933. There were not enough provisions in the overcrowded orphanages, where the death rate was 30% and higher from disease and starvation. Conditions were so appalling that more able-bodied children often escaped to return to a chance for survival in the streets.
Notes
Photo taken between spring – late summer, 1933. 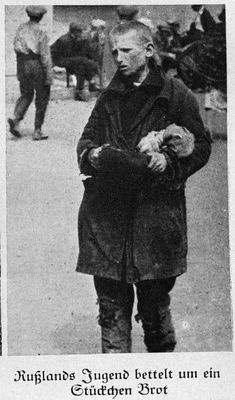