Creator
Wienerberger, Alexander, 1891-1955, Photographer
Media Type
Image
Text
Item Types
Book illustrations
Photographs
Description
We see several clusters of people – adults and children - on the grounds of a low-lying building that is closed and the windows shuttered. Although it is difficult to see clearly, the people next to the house look particularly impoverished. One group closest to the camera appears to be a family, with the mother talking or playing with her young son while another person lies next to them. Most likely all of these people have come from the countryside without relatives in the city or a place to stay, and have found this location as a temporary refuge. A woman, perhaps a resident of that neighborhood, walks by.

Rural residents were not allowed food ration coupons, therefore could not access the city’s primary sources of food, however inadequate they were. Having traded their last life’s possessions for bread, having no work or shelter, too weak to return to their villages to die - many of Ukraine’s once proud farming families succumbed to slow death in the neighborhoods of urban Ukraine. 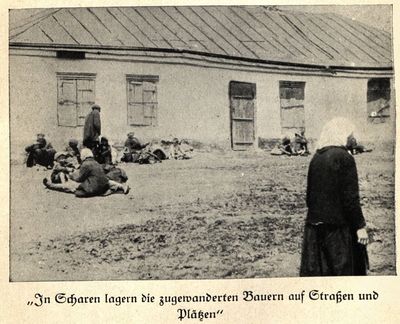