Creator
Rappeport, Gabriel, 1893 - 1935, Photographer
Media Type
Image
Text
Item Type
Photographs
Description
One of an extensive series of photographs depicting the effects of starvation that Gabriel Rappeport took in and around Kherson during the 1920s famine. These photographs were later included in a museum about the famine which he established upon the recommendation of local officials.

During the 1920’s, many photographs were taken which show starving individuals being cared for in hospitals or other medical facilities. To date, we have found no authenticated photos of famine victims in medical settings during the Holodomor. Medical personnel were not allowed to acknowledge and record starvation as a medical condition or cause of death during the Holodomor; furthermore, photography in any medical facility was by official permission only, or in model facilities open to visitors, where victims of starvation were not part of the tour.

In 1921,the normally abundant southern steppe areas of Ukraine were suffering from drought and subsequent starvation as severe as in the Volga regions of Russia. However, the Bolsheviks in Moscow requisitioned the harvests from throughout Ukraine to feed the starving populations of Russia’s agricultural regions. The dire conditions in the Ukrainian steppes were further compounded as large numbers of migrants from Russia’s famine zones arrived, expecting to find plentiful sustenance.

Inscriptions
“Типы голодных из палаты обреченных (Нарбольница 1), Фото 2.” [Examples of the starving in the house of the doomed (People’s Hospital No. 1), photo 2.] 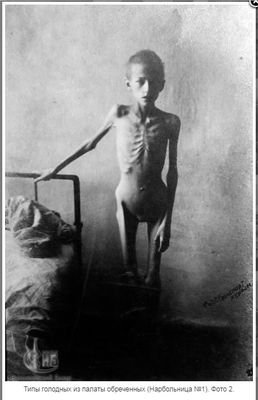