Creator
Wienerberger, Alexander, 1891-1955, Photographer
Media Type
Image
Text
Item Types
Book illustrations
Photographs
Description
A young woman worker sits by her temporary dwelling. It appears to be dug into the side of a small dirt embankment, with the floor of the tiny shelter below grade. The part of the shelter that extends beyond the embankment is sided by assorted building scraps and piles of bricks. Pieces of cloth hang over the roof and on the dirt embankment. Wienerberger states that this is a typical temporary dwelling for many of the workers at the factory he was managing for several months in 1933 in Kharkiv. 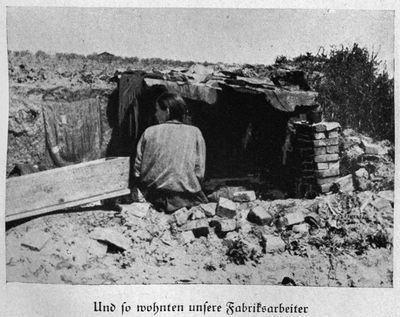