Creator
Wienerberger, Alexander, 1891-1955, Photographer
Media Type
Image
Text
Item Types
Book illustrations
Photographs
Description
Wienerberger takes a photo of the new apartment building where he lived for part of his stay in Kharkiv while overseeing the retrofitting of a factory. The building appears to be shabbily constructed and is missing all or most of the glass in the windows, several of which are covered with some other material. The photographer states that it also lacked water and lighting while he was there. (See also Entry PD 136)

Inscriptions
Caption: “’Die Wohnung hatte keine Fensterscheiben, kein Wasser und kein Licht!’ So wohnte ich in Charkow.” [“The apartment had no window panes, no water and no light!” That is how I lived in Kharkiv.]
Date of Original
1933
Date Of Event
1933
Image Dimensions
Image Width: 11cm
Image Height: 8cm 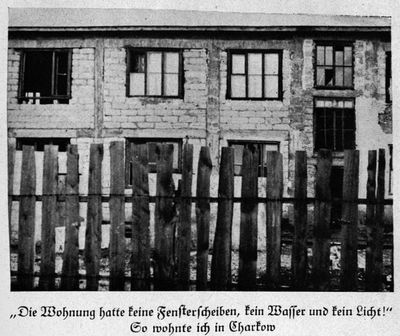