Creator
Wienerberger, Alexander, 1891-1955, Photographer
Media Type
Image
Text
Item Types
Photographs
Pamphlet illustrations
Description
A young woman sits leaning against the inside edge of a wooden stair landing, with a thin little toddler in a bonnet and dress, sitting beside her. It is not clear whether they are simply resting or begging. From behind, we see the lower-half of a woman in white stockings and somewhat flimsy white medium high heeled shoes and a dark suit. Neither the photo nor the caption reveals whether the woman had ignored the young mother and her child, or had stopped to speak to them or had assisted them in some way, before heading up the stairs.

The title in English is: "Brethren in need! Don’t let them starve! Images from the life of the Russian-German colonists in the past and present." This is one of several “Brethren in Need” booklets produced in the early 1930’s by various primarily religious organizations in Germany and Austria. Their intent was to raise awareness and support for the many German colonies across Russia and Ukraine that were suffering from devastating famine conditions during the Holodomor years. The first half of the pamphlet describes earlier conditions of prosperity among the German colonies. The second half opens with images of decline and deportation, then death and starvation specifically in 1933 Ukraine. Although the text focuses on the fate of the ethnic German population, the captions to the Ukraine photos simply provide the date and a location or the subject of the photo. All 7 of the 1933 photographs were taken in and around Kharkiv by Alexander Wienerberger, although unattributed to him.

For related essays and a full list of original versions and those published through 1939, with captions, see Related Links on right. 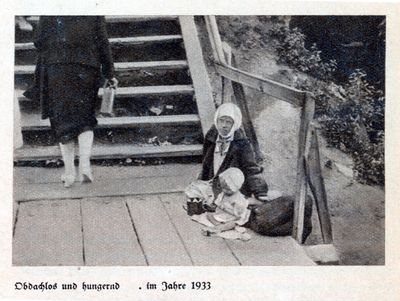