Creator
Wienerberger, Alexander, 1891-1955, Photographer
Media Type
Image
Text
Item Types
Book illustrations
Photographs
Description
We see men and women at a table in the open air food market selling milk either by the glass or by the bottle. For people who could not obtain milk ration cards to use in official milk distribution centers, these overpriced markets were the only options available. (For a photo of an official milk rations store, see PD104: http://vitacollections.ca/HREC-holodomorphotodirectory/3636276/data)

Although private trade was considered anti-socialist, it was tolerated within often arbitrary limitations, and was crucial to the survival of many buyers and sellers during the Holodomor (Osokina, 106-7, Applebaum, 266)

Perhaps the sellers looking warily at the photographer were concerned that their photograph was being taken as evidence against them. Also, because photography of a wide range of subjects was strictly forbidden, the sellers may have been signalling disapproval or a warning to Wienerberger. SEE: Restriction of Photography section in "The Holodomor's Forbidden Photographs." 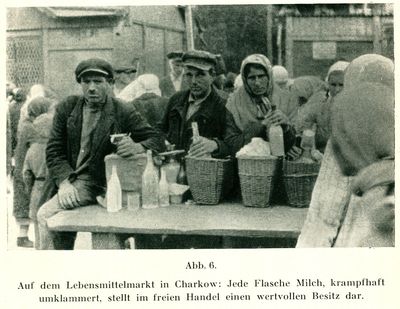