Creator
Wienerberger, Alexander, 1891-1955, Photographer
Media Type
Image
Text
Item Types
Book illustrations
Photographs
Description
Two open horse drawn carts, the one in front quite full, transport bodies collected from the city streets to a burial site. Several men passing nearby stop to look at the carts. The location appears to be a major city street in Kharkiv with a tree-lined boulevard. A streetcar runs on the other side of the boulevard.

During the spring and summer of 1933, tens of thousands of Ukraine’s residents were dying daily of starvation. In June alone, on average 28,000 persons were dying each day in their village homes, in the fields, along roadsides, and in the cities of Ukraine. (Wolowyna, graph).

In Kharkiv, most of those who were found dead in the streets were people who left their starving families in the rural villages and collective farms in search of food for sale or barter, or to find work.

However by 1933, with the implementation of residency permits (Liber, Total Wars, 154), farm workers were considered illegal aliens in the city. They were not allowed the required food ration cards; work was not available for most of them; and barter – where not actually illegal, was disproportionately unfair to the rural seller. To return home, was a certain death sentence. But without food or shelter in the already overcrowded city, these immigrants from the countryside slowly began to die in ever increasing numbers throughout the city.

Each day city workers were sent out to collect the dead that were found in the streets into wagons and take them to one of many hastily designated plots of land for mass burial. 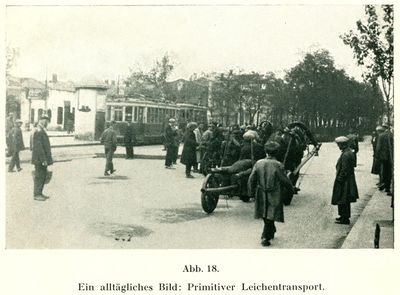