Creator
Wienerberger, Alexander, 1891-1955, Photographer
Media Type
Image
Text
Item Types
Photographs
Photograph albums
Description
In the foreground are several new mass graves near an existing cemetery where we see several wooden crosses of the Orthodox Christian faith, acknowledging the persistence of Christianity in spite of Communism. The marked sites also acknowledge the dignity of personal identity even in death, versus the unmarked mass graves containing the bodies of those whose identities were now forever lost.

From 1929-1930, the attack on all religious institutions intensified,resulting in the closing and destruction of churches and the arrest of hundreds of clergy. The practice of religion was both publicly ridiculed and demonized in all venues of Party indoctrination. Nevertheless, most people still held to their beliefs and traditions in private and the remnants of religious practice were still visible. Thus one would still see, as photographed here, homemade crosses on the older individual gravesites in many cemeteries. These were often taken down by Party functionaries, only to reappear again later.

During the spring and summer of 1933, tens of thousands of Ukraine’s residents were dying daily of starvation. In June alone, on average 28,000 persons were dying each day in their village homes, in the fields, along roadsides, and in the cities of Ukraine.

Large numbers of unidentified victims were picked up each day in Kharkiv. In his memoir, Wienerberger states that each mound marks a grave for 15 bodies, and eventually each of 7 new cemeteries erected on the outskirts of Kharkiv included 250 such mounds. (Hart auf Hart, p.182).

This personal album has a subtitle written on the inside of the front cover: “Proletarien aller Länder vereinigt euch!....(im Massengrab.)” [Proletarians of all countries unite! ... (in the mass grave)]. Nicknamed the "Red" album because of its red cover, it contains photos from Kharkiv, Crimea, and Moscow taken 1933 through the winter 1933-1934. The Crimea and Moscow photos are not included in the Directory. They not only portray locations outside Ukraine’s political boundaries at that time but are primarily of a sight-seeing or personal nature. 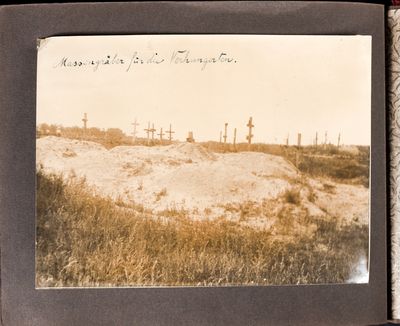