Creator
Wienerberger, Alexander, 1891-1955, Photographer
Media Type
Image
Text
Item Types
Photographs
Photograph albums
Description
We see a solitary woman seated on one of the benches that are set up alongside the market area. Looking weary, and perhaps resentful or wary, she stares back at the photographer. The captions state that she is offering to sell four small dried fish “on the black market.” The caption from his memoir, Hart auf Hart, adds that the price is a highly inflated 2 rubles.

There are many people in the background where goods are also being sold or traded. One woman at the edge of the crowd is barefoot though she wears a heavy coat.

The black marketeering of food, meaning that items are sold at a much higher price than the legal price to those who can’t get them through officially approved channels was commonplace. Although private trade was considered anti-socialist, it was tolerated within often arbitrary limitations, and was crucial to the survival of many buyers and sellers during the Holodomor (Osokina, 106-7, Applebaum, 266)


Context: Availability and access to food in urban and industrial areas 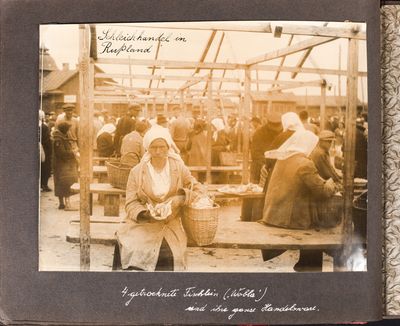