Creator
Wienerberger, Alexander, 1891-1955, Photographer
Media Type
Image
Text
Item Types
Photographs
Photograph albums
Description
In what appears to be an open, uncultivated field, a man sits in his temporary dwelling. The tiny shelter is slightly raised off the ground and made up of building scraps and assorted pieces of cloth. Wienerberger states that this is a typical temporary dwelling for many of the workers at the factory he was managing for several months in 1933 in Kharkiv. 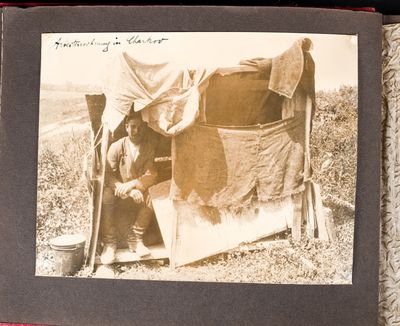