Creator
Wienerberger, Alexander, 1891-1955, Photographer
Media Type
Image
Text
Item Types
Photographs
Photograph albums
Description
We see a small hut with possibly a stable next to it, built up to and into what looks like the side of a gully. Dirt and grass make up the roof. An open shed stands alongside, with a blanket draped over one side. Wienerberger writes that this is home for a worker and quite likely for his family as well. A factory is visible in the distance. 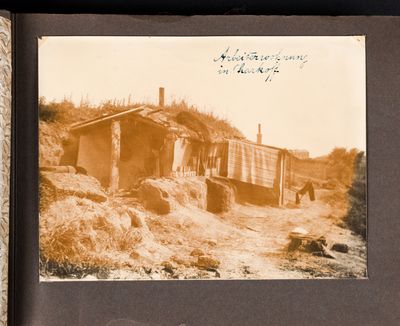