Creator
Wienerberger, Alexander, 1891-1955, Photographer
Media Type
Image
Text
Item Types
Photographs
Photograph albums
Description
An elderly man sits on a small chest, with a long handled hoe in his hand and a woodworking tool near his knee. Many poles and long handled garden tools lie about the yard. Perhaps he repairs or makes these implements for a living. His little hut is built into the side of an embankment, with additional dirt pushed up against part of the front of the house, presumably for insulation.

Some of the captions to this photo state that this is the house of a worker, someone who earned wages from a State run enterprise for a living. It raises the question, whether some relation of the self-employed older man pictured here is employed at the factory that Wienerberger managed or elsewhere, and whether they also lived in this tiny earthen dwelling. 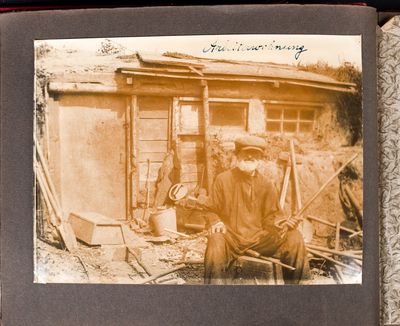