Home (Advanced) → What's New → Details
Street view of a “Torgsin” store in Kharkiv, with a car parked in front
Description

Creator
Wienerberger, Alexander, 1891-1955, Photographer
Media Type
Image
Text
Item Types
Photographs
Photograph albums
Description
The photographer shows his BMW (which he had shipped from Germany for his use in the USSR), parked in front of what he identifies as a “Torgsin” shop.
(from the Russian “Torgovlia s inostrantsami” or, Trade with Foreigners).

Luxurious curtains hang in the larger windows. The outer doors appear to be open, but not the inner door. A man –perhaps an attendant, sits near the entrance. Little activity is seen in the immediate vicinity. The long shadow cast by the tree indicates a sunny early morning or late afternoon. Around the corner and rather indistinctly visible is a very long, crowded line of people sitting and standing alongside a fence across the street. Based on published research, it is highly likely that they were waiting for the Torgsin shop to open or re-open for resident consumers, while foreigners had their own assigned hours for shopping. Note also the person peering into the car.

The Soviet Torgsin stores were initially established exclusively for foreigners and the elite, where a full range of products could be purchased in hard currency. In 1931, the Politburo added many more shops of a much simpler variety and opened the Torgsin to Soviet citizens who could now trade in their family’s last valuables in exchange for a sack of flour or a loaf or two of bread.

In Ukraine, taking advantage of the desperation of a starving population, the number of shops grew from 74 in January 1933 to 249 in July,(Marochko, Torgsin, 4) mostly in the regional capitals of the worst stricken oblasts of Kyiv and Kharkiv. As death rates from famine soared in 1933, so did Torgsin profits: of approximately 107 million rubles from the receipt of precious metals in the Soviet Union, two thirds came from Ukraine alone. Ukraine’s starving farmers, who were not permitted to have ration cards, often walked for miles and days to get to a Torgsin as a last resort. Now they would pay for the “bread” forcefully taken from them over the winter with their wedding bands and family heirlooms. For many, even that was not enough to survive.

This personal album, Das Arbeiterparadies. U.d.S.S.R [The Workers’ Paradise. U.S.S.R.], has a subtitle written on the inside of the front cover: “Proletarien aller Länder vereinigt euch!.... (im Massengrab.)” [Proletarians of all countries unite! ... (in the mass grave)]. Nicknamed the "Red" album because of its red cover, it contains photos from Kharkiv, Crimea, and Moscow taken 1933 through the winter 1933-1934. The Crimea and Moscow photos are not included in the Directory. They not only portray locations outside Ukraine’s political boundaries at that time but are primarily of a sight-seeing or personal nature. 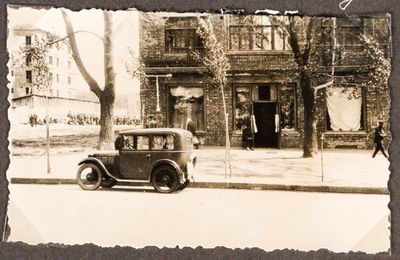