Creator
Wienerberger, Alexander, 1891-1955, Photographer
Media Type
Image
Text
Item Types
Photographs
Photograph albums
Description
This building complex, named Derzhprom ( Держпром; Госпром in Russian) was designed and built in the late 1920’s to provide Kharkiv, the newly designated capital of the Ukrainian Soviet Republic an appropriately impressive, innovative Soviet style structure for the administrative offices of its numerous government owned industries, or “trusts,” as well as other government departments. Wienerberger writes in his memoir, Hart auf Hart, that many of the largest Soviet factories were fronts for military armaments production. Therefore, his caption makes a cynical reference to the buildings as representing the Soviet government’s preparation for war. Note the contrast with the very simply dressed people in the foreground and the general lack of vehicles and activity in the vicinity.
(See also Entry PD 138 and Entry PD 208.)

This personal album, Das Arbeiterparadies. U.d.S.S.R [The Workers’ Paradise. U.S.S.R.], has a subtitle written on the inside of the front cover: “Proletarien aller Länder vereinigt euch!.... (im Massengrab.)” [Proletarians of all countries unite! ... (in the mass grave)]. Nicknamed the "Red" album because of its red cover, it contains photos from Kharkiv, Crimea, and Moscow taken 1933 through the winter 1933-1934. The Crimea and Moscow photos are not included in the Directory. They not only portray locations outside Ukraine’s political boundaries at that time but are primarily of a sight-seeing or personal nature. 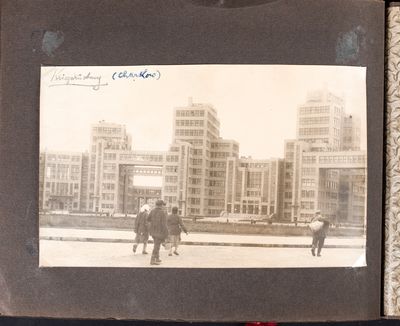