Creator
Wienerberger, Alexander, 1891-1955, Photographer
Media Type
Image
Text
Item Types
Photographs
Pamphlet illustrations
Description
Two men walk past a series of storefronts. While one of the men looks at the display of liquor bottles to his right, the other directs his attention to the cluster of children standing on the sidewalk just ahead. As confirmed by many other sources, the captions to the two published versions shown here state that liquor was abundantly available. Moreover, acquiring liquor did not require ration cards, in contrast to food products.

The men’s clothing identify them as urban residents, as does the dress of the woman behind them. The man barely visible behind her, on the other hand, appears to be barefoot.

The cropped version of the photo (See http://vitacollections.ca/HREC-holodomorphotodirectory/3636343/image/4219458 from Wienerberger’s memoir Hart auf Hart) shows only the liquor store with the two men walking by it.
Notes
Photo taken between spring – late summer, 1933. 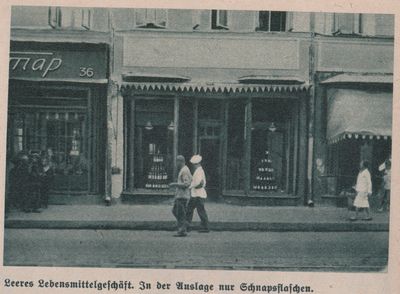