Creator
Wienerberger, Alexander, 1891-1955, Photographer
Media Type
Image
Text
Item Types
Book illustrations
Photographs
Description
While a woman in coat and white scarf heads across the photographer’s field of view in the foreground, a man who appears to be an amputee heads away from the photographer on his crutches toward a crowd of people in the street in the distance. The location appears to be near a marketplace. The photographer, who frequently wrote of the overcrowded Soviet trams and resulting accidents, states that the man sustained his injury when a tram ran over his feet.

For related essays and a full list of original versions and those published through 1939, with captions, see Related Features on right. 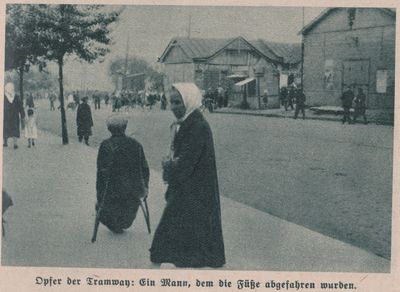