Creator
Wienerberger, Alexander, 1891-1955, Photographer
Media Type
Image
Text
Item Types
Photographs
Pamphlet illustrations
Description
Hundreds of people are crowded around the front and to the side of what the photographer indicates is a place to get bread. The entrance to the store is just to the left of the white building, and above the door is a temporary sign that reads “Хаторг”. (See PD3, a very similar photo taken shortly after this one, for better resolution on the sign:
http://vitacollections.ca/HREC-holodomorphotodirectory/3636354/data ) A “Хаторг" or Khatorh (abbreviation of: Kharkiv Trade Organization) was one of several types of food access centers created or repurposed in the early 1930s to manage the sharply diminishing food supply for the greatly expanded urban and industrial population. This establishment is most likely selling goods for residents with ration cards; however, it is possible that it had been repurposed in 1933 to sell bread for rubles (Wienerberger, Osokina) (more details below).

At this Khatorh, the door appears to be open, but the large waiting crowd is an indication that supply and delivery is not meeting the demand for the basic necessities that can be obtained here.


Context: Availability and access to food in urban and industrial areas

With the introduction of the 5 year plan in 1928, existing systems of food distribution and access collapsed in the Soviet Union. Collectivization was not only an enormous human catastrophe in Ukraine, but an economic policy failure that couldn’t meet the needs of the rapidly expanding non-agricultural workforce (the proletariat) or compensate for the virtual shutdown of private trading.

A hierarchy of food rationing became the norm everywhere in the USSR in 1930. Those permitted to have ration cards could purchase an increasingly narrower range of basic foods at relatively low prices in certain designated stores. Having a ration card did not guarantee that the food would be available, however. Survivors frequently mentioned waiting many hours in long lines, only to leave empty handed. Others spoke of riots occurring amid the bread lines.

Ration allotments were issued to individuals based on their assigned rank in the proletariat (non rural workers) and their place of residence. Locations in the USSR were assigned a rank based on their level of importance to the Soviet State. In Ukraine, the Donbas industrial region and Kharkiv were ranked as relatively important. (Osokina, 62,78)

Farmers and their families and most other rural residents were not permitted to have ration cards. This huge segment of the population was dependent on the seasonal produce of the little garden plots near their homes, or on trade at the now impoverished outdoor markets selling inferior goods at prices as much as ten times that of ration card prices.

In 1933, the number of state run commercial stores that sold goods for rubles and existed previously in only a few of the major Soviet cities, multiplied into the hundreds in order to take advantage of the desperation of a starving population. (Osokina, 127).The same applied to the Torgsin, foreign currency shops originally designed for foreign consultants and visitors. When Torgsin were opened to local citizens, allowing them to trade their gold and family heirlooms for food, the number of shops and the volume of their business increased dramatically in 1933, most notably in Ukraine. For further information on Torgsin, see PD135: http://vitacollections.ca/HREC-holodomorphotodirectory/3636331/data

For related essays and a full list of original versions and those published through 1939, with captions, see Related Features below photo and Home page menus.
Date of Original
1933
Date Of Event
1933
Image Dimensions
Image Width: 11cm
Image Height: 8cm 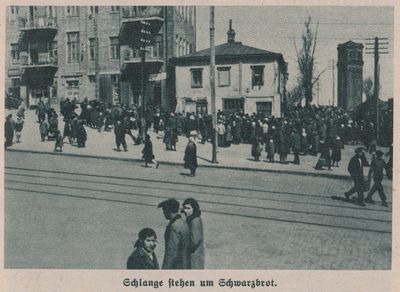