Home (Advanced) → What's New → Details
A man lies dying on the pavement near a market in Kharkiv, as a woman and a young child walk by
Description

Creator
Wienerberger, Alexander, 1891-1955, Photographer
Media Type
Image
Text
Item Types
Photographs
Photograph albums
Description
In the caption to the photograph in this album, Wienerberger uses the expression “in agonie” - that the man on the pavement is near death; in German, agonie may also mean death throes. The man’s upper body is partially obscured by a blanket or jacket. At the time of the photograph, a woman has passed the man, and a young child appears to be crossing the street toward him and to the right, but not looking at him. Behind the man are a series of shop fronts that are closed.

For related photos, essays, and a listing of originals and versions published through 1939 with their captions, check Related Features below photo and Home page menus. 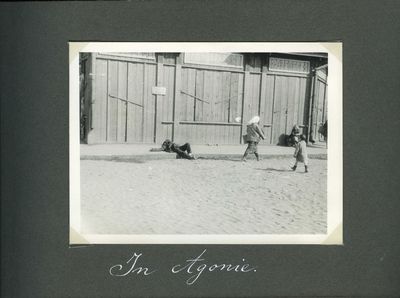