Creator
Wienerberger, Alexander, 1891-1955, Photographer
Media Type
Image
Text
Item Types
Photographs
Photograph albums
Description
In a yard or grassy area near what may be factory housing, we see a woman sleeping or resting in the foreground, with two other women behind her. One is cradling the head of the other in her lap, inspecting the anguished looking woman for lice, according to Wienerberger. Most likely these women came to the city from the starving rural countryside and are now homeless. The unsanitary conditions of homelessness increased the possibilities for a variety of diseases, including deadly typhus carried by lice. On the other side of the wooden fence nearby are two sets of railroad tracks and a factory is visible in the distance.

Context: the fate of rural migrants in the cities

Formidable obstacles awaited them in a large overcrowded city such as Kharkiv, whose population had nearly doubled between 1920-1933. Officially, Ukraine’s rural residents were now considered illegal aliens in the cities, and as illegals without close family or friends in the city, it would be almost impossible to find a place to stay, and by law, no public shelters were available. Most ended up sleeping and congregating in vacant lots or simply along streets and sidewalks. The weakened, impoverished migrants living in such unsanitary conditions were susceptible to often fatal diseases carried by lice or caused by unclean drinking water.

Rural residents were not allowed food ration coupons, therefore could not access the city’s primary sources of food, however inadequate they were. Having traded their last life’s possessions for bread, having no work or shelter, too weak to return to their villages to die - many of Ukraine’s once proud farming families succumbed to slow death from disease and starvation in the neighborhoods of urban Ukraine. 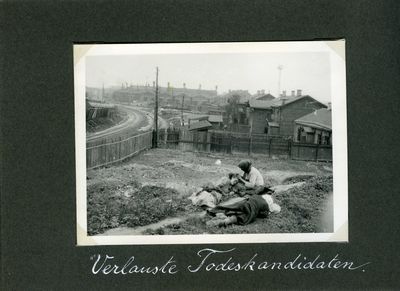