Creator
Wienerberger, Alexander, 1891-1955, Photographer
Media Type
Image
Text
Item Types
Photographs
Photograph albums
Description
Wienerberger presents a close-up view of a one to one transaction in a busy marketplace setting in Kharkiv. A young man with a bag slung over his shoulder is engaged in conversation with a woman seated on a bench, with something unwrapped lying nearby. The man standing in the foreground and another seated woman look on. The photographer states that this is an instance of black marketeering of food, meaning that items are sold at a much higher price to those who can’t get them through officially approved channels. A woman on the far left stares intently at the small plate in her hand.

Although private trade was considered anti-socialist, it was tolerated within often arbitrary limitations, and was crucial to the survival of many buyers and sellers during the Holodomor (Osokina, 106-7, Applebaum, 266) 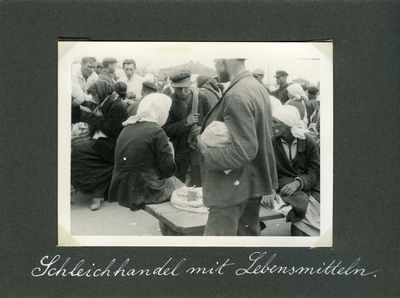