Creator
Wienerberger, Alexander, 1891-1955, Photographer
Media Type
Image
Text
Item Types
Photographs
Photograph albums
Description
A young farmer, according to the photographer, lies dead on the sidewalk of a residential neighborhood. Several people are standing near the victim, among them five children of various ages (three of the youngest are barely visible), who exhibit a range of reactions. Four adults stand closest to the victim, two regarding him with apparent concern, while another appears to be talking about it with a man and a woman standing further away in the background, barely visible. Most of those gathered appear to be city residents. The fact that this sight has elicited considerable interest, may mean that the sight of dead or dying people is still uncommon, at least in this Kharkiv neighborhood.

See Record PD1 for a close-up photo of the victim. 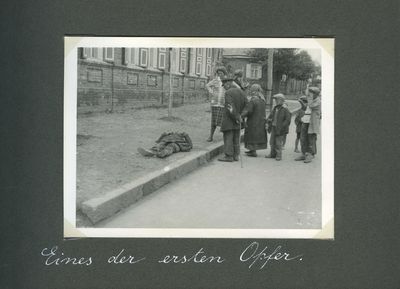