Creator
Wienerberger, Alexander, 1891-1955, Photographer
Media Type
Image
Text
Item Types
Photographs
Photograph albums
Description
In the foreground, we see a man in a heavy coat lying dead near a tree not far from an unpaved road. Just a few feet away and closer to the road stand two women in dark coats, both probably urban residents by their attire. We do not see their faces. One stands with her back to the victim and the camera, while the other faces in her direction. At this moment, they do not appear to be paying attention to the victim. 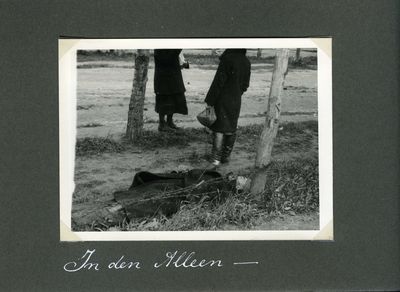