Creators
unknown, Photographer
Mewes, G. H.
Media Type
Image
Text
Video
Item Types
Photographs
Pamphlet illustrations
Postcards
Description
During the 1920’s, many photographs were taken which show starving individuals being cared for in hospitals or other medical facilities. To date, we have found no authenticated photos of famine victims in medical settings during the Holodomor. Medical personnel were not allowed to acknowledge and record starvation as a medical condition or cause of death during the Holodomor; furthermore, photography in any medical facility was by official permission only, or in model facilities open to visitors, where victims of starvation were not part of the tour.


This scene was also portrayed here:
Mewes, G. M, 1922. Famine : The Russian Famine of 1921. Save the Children Fund. 32 mins (9 mins + 23 mins) Black and white; mute. 35mm. The scene of these two young boys eating is shown in a section subtitled: “The two stages of starvation.” The original film is held by the National Film Archive of Great Britain.
It can be viewed on YouTube as: Volga Famine of the 1920's, where the scene appears between 5:29-5:45, https://www.youtube.com/watch?reload=9&v=hIJirOk7O6w


Also available for viewing and download, with limitations, from the International Committee of the Red Cross, Audiovisual Archives: https://avarchives.icrc.org/Picture/9354 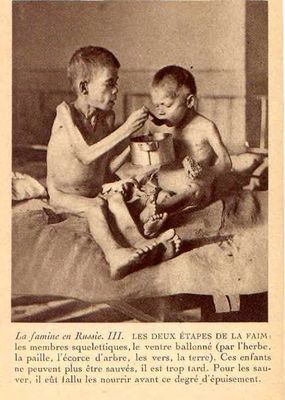