Creator
Liberman, Isaiah, 1885 -1921, Photographer
Media Type
Image
Text
Item Types
Book illustrations
Photographs
Pamphlet illustrations
Postcards
Description
Many photographs taken during the 1920s international relief missions were posed, such as this one, and many include children partially or fully unclothed to show the effects of starvation on the body. To date, we have not located any authenticated photos from the Holodomor that present a posed, partially or fully unclothed person suffering from starvation.

This photograph was used in newsletters, pamphlets, postcards, and posters to raise awareness, garner sympathy, and raise funds, particularly in Western Europe, for the massive relief effort that was quickly organized in 1921 to help the starving regions of Russia and later, Ukraine.

Buguruslan was part of Samara Province in the lower Volga region of Russia in the 1920s.


Original photo can be viewed in the National Library of Norway digital collection. http://nabo.nb.no/trip?_t=0&_b=NANSEN_ENG&_s=E&_n=0&_q=50&_l=www_eng_l&
_r=P1071
The National Library of Norway has made its photo available for high resolution downloading here:
https://commons.wikimedia.org/wiki/File:Girl_affected_by_famine_in_Buguruslan,_Russia_-_1921.jpg
Caption: “In the village S. Sojekjejevo. A starving 7 year old girl who has a swollen stomach due to prolonged starvation, and because she has eaten grass.”

Also available for viewing and download, with limitations, from the International Committee of the Red Cross, Audiovisual Archives: https://avarchives.icrc.org/Picture/9377

Also released as a postcard: “La famine en Russie.IX.” Union internationale de secours aux enfants, Geneva, 1922. (Ninth in a series of 9 postcards created by the UISE), with text in French, mailed out to raise funds and awareness of the 1921-22 famine. 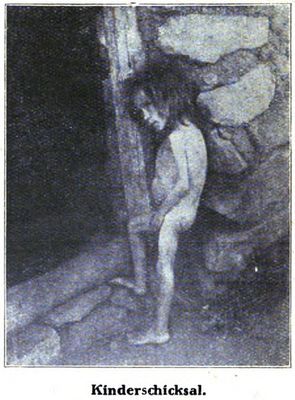