Creator
Liberman, Isaiah, 1885 -1921, Photographer
Media Type
Image
Text
Item Types
Photographs
Pamphlet illustrations
Postcards
Description
This photo was one of many documenting famine conditions taken in the Volga region of Russia in 1921-1922. They were later used in newsletters, pamphlets, postcards, and posters to raise awareness, garner sympathy, and raise funds, particularly in Western Europe, for the massive relief effort that was quickly organized in 1921 to help the starving regions of Russia and later, Ukraine. In this case, the Friends Emergency War Victims Relief Committee (FEWVRC),an official committee that existed 1914 -1924 as part of what is now the Quakers in Britain, used this image for one of a series of postcards to raise funds for Russian famine relief.

Information provided on the National Library of Norway (Nasjonalbiblioteket) original photo entry states: “Probably from Samara-album with dedication in Russian, French and German: To the suffering humankind's friend Fridtjof Nansen from ... Commission for relief to the Starving. Samara December 3, 1921.”

Buguruslan was part of Samara Province in the lower Volga region of Russia in the 1920s.


Original photo available for viewing and download: https://commons.wikimedia.org/wiki/File:No-nb_bldsa_6a129.jpg (confirmed authenticity by the National Library of Norway)
Caption: "Starving Muslim children in the town." For additional information about the photograph on the National Library of Norway site: http://nabo.nb.no/trip?_t=0&_b=NANSEN_ENG&_s=E&_n=0&_q=50&_l=www_eng_l&_r=M1078

Also available in thumbnail view with some descriptive text from the Library of Congress Prints and Photographs Division Washington, D.C.
https://www.loc.gov/pictures/item/2003662210/
Both the photographer's name and the village location are misspelled.
Title is: "Bugurslan, Samara Province. Starving Moslem children from Collecting Station No. 17. These children have been lost or deserted by their parents"

Also available for viewing and download, with limitations, from the International Committee of the Red Cross, Audiovisual Archives: https://avarchives.icrc.org/Picture/9408

Location of Original
Original postcard: Group of famine children postcard Russia, circa 1921-22. Friends Emergency War Victims Relief Committee (FEWVRC) archive: LSF FEWVRC PICS 7_11_2. ©Religious Society of Friends (Quakers) in Britain.
Original photograph: National Library of Norway, Oslo, Norway; Wikimedia Commons image is in public domain; however: " Please provide information about where the image was first published, who created it, and when the photographer died, if known. The right to be attributed does not expire in Norway."
Terms of Use
Contact Religious Society of Friends (Quakers) in Britain for permission to use the postcard image for any purposes beyond personal use.
Reproduction Notes
Postcard reproduced with the permission of the Religious Society of Friends (Quakers) in Britain; pending. 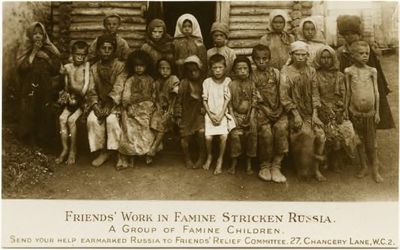