Creator
Liberman, Isaiah, 1885 -1921, Photographer
Media Type
Image
Text
Item Types
Photographs
Photograph albums
Description
According to the barely legible album inscription, the album was presented to the Quaker representative of the American Friends Service Committee in remembrance of their work in Buzuluk. The photographer, Isaiah Liberman is identified as the local representative of the Russian and Soviet governments designated to work with all foreign organizations.

During the 1920’s, many photographs were taken which show starving individuals being cared for in hospitals or other medical facilities. To date, we have found no authenticated photos of famine victims in medical settings during the Holodomor. Medical personnel were not allowed to acknowledge and record starvation as a medical condition or cause of death during the Holodomor; furthermore, photography in any medical facility was by official permission only, or in model facilities open to visitors, where victims of starvation were not part of the tour.

Buzuluk was part of Samara Province in the lower Volga region of Russia in the 1920s.

Альбом голода в Поволжье. Самара 1921–22. Фото Либермана. http://resource.history.org.ua/item/0007855
p.28 for photo; p.23 as placed on album page; p.25 for caption. Copy of album above, but without added English translations. May be easier to navigate.

Inscriptions
Caption: “Бузулук приемник но.2. Больной, изможденный мальчик просит помощи глазами. Самара. Фот. Либерман.” “Buzuluk medical center #2. A sick, emaciated boy begs for help with his eyes. Samara. Photo. Liberman.” (Note: the captions were printed on separate slips of paper; in this case, the caption was mismatched to another nearby photo in the album.] 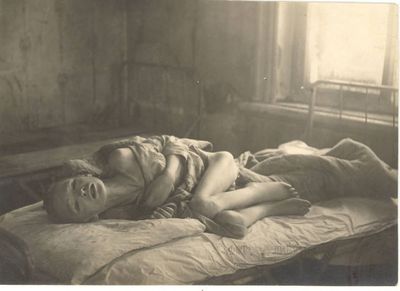