Creator
Wienerberger, Alexander, 1891-1955, Photographer
Media Type
Image
Text
Item Types
Book illustrations
Photographs
Description
Wienerberger shows a section of several houses constructed for the workers at the factory he was managing for several months in 1933 in Kharkiv. Lumber, pieces of framing and debris are scattered about the “development”, as the photographer ironically calls it. People are already living there, judging by the laundry hanging on lines between the buildings. The roof of a building further away in the picture appears to be patched and has sections missing. 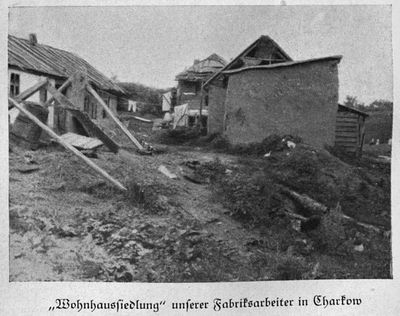