Home (Advanced) → What's New → Details
Non-Holodomor: A cart loaded with corpses collected along the streets of Kherson and stripped of their clothing is on its way to the cemetery
Description

Creator
unknown, Photographer
Media Type
Image
Text
Item Types
Book illustrations
Photographs
Pamphlet illustrations
Description
One of a series of photographs depicting famine conditions in Ukraine that the Ukrainian Red Cross sent abroad in 1921-1922 to various charitable organizations and to the Ukrainian diaspora press. It was also one of 20 photographs taken in Ukraine that was featured in the Haut Commissariat du Dr. Nansen, rapport no. 22: La Famine en Ukraine, April 1922. See Notes below.

This photo appears as #10 of 17 photographs housed among the documents of the "Union international de secours aux enfants" deposited in the Canton Archives of Geneva, Switzerland. These photographs were originally sent by the Ukrainian Red Cross with a separate numbered list in an official envelope date-stamped as arriving in Geneva on May 5, 1922. (Serbyn 1992, p. 675.)
Listed as:
10. "Перевіз на цвинтар трупів померлих від голоду. Трупи були позбирані на вулицях міста Херсону." "Transport au cimetière de cadavres ramassés dans les rues (ville de Kherson)." [Transport of corpses to the cemetery which were collected along the streets (city of Kherson].


Also available for viewing and download, with limitations, from the International Committee of the Red Cross, Audiovisual Archives: https://avarchives.icrc.org/Picture/5420
(Location incorrectly given as Russia). 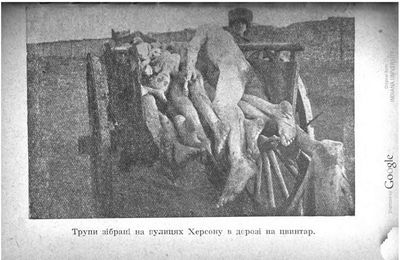