Creator
Wienerberger, Alexander, 1891-1955, Photographer
Media Type
Image
Text
Item Type
Photograph albums
Description
The Innitzer album is the popular name of an album of photographs that were taken by the Austrian engineer Alexander Wienerberger while he was working as a consultant in Kharkiv in 1933.

The photographs depict starving residents from the rural heartland of Ukraine flocking to the Ukrainian capital, Kharkiv on foot; the endless lines of city residents waiting to buy their meager ration of food ; the homeless rural residents – young and old alike, struggling to survive and dying on the city’s streets, hastily dug mass graves just outside the city.

In September 1933, Cardinal Theodor Innitzer of Vienna, the presiding Roman Catholic archbishop in Austria at that time, had established a widely publicized interfaith humanitarian relief committee to provide aid to the starving in Soviet Ukraine and the German colonies in Russia. The Soviet government in Moscow, however, emphatically denied the existence of famine, and the committee’s offers of assistance were refused. When Wienerberger returned to Austria in 1934, he compiled the set of 25 photographs into an album he titled Die Hungertragödie in Südrussland 1933 [The Tragedy of Famine in South Russia 1933] and presented it as a gift of respect and gratitude to Cardinal Innitzer for his efforts. The album remains to this day in the Diocesan Archive in Vienna. 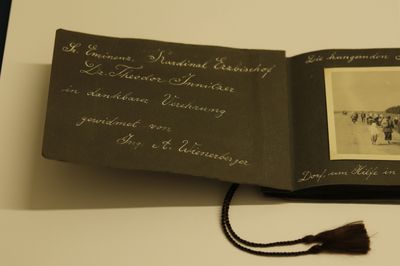