Creator
Babij, Lana, Author
Media Type
Text
Description
Whiting Williams, a well-respected, widely published authority on labor-management relations, visited Ukraine in his professional capacity in August, 1933 – a follow-up to his visit to Ukraine’s Donetsk mining region in 1928. Upon arrival in 1933, he was so stunned by the disastrous conditions he encountered that he resolved to inform the American public immediately upon his return home. While newspapers and magazines displayed photos of notable visitors at new Soviet factories and model collective farms or Margaret Bourke-White’s photo essays of mammoth Soviet structures and muscular workers - no published photos documented the suffering that Williams witnessed.

Williams’ travel arrangements were typically restrictive, but he attempted at least a few amateur photo shots that would provide a hint of the human catastrophe surrounding him. Whenever possible, he also tried to catch a few words with local residents – hotel workers, train conductors, miners – to get beyond the propaganda and offer a balancing perspective to the succession of model sites on the itinerary designed to impress visitors. Yet as shocked as he was by the conditions of death and despair he encountered off the tour, he also wanted to present to his potential readers back home not simply a picture of misery but of a common humanity desperate to survive. Moreover, he sought to convey his own underlying hope and respect for the people he documented.

Williams edited his journal pages, filled with factual observations and laced with anguish, and sent out the manuscript with photographs to US magazine editors who had previously published his work. To his dismay, however, he found that no one was willing to run this story. (See “Whiting Williams: a Biographical Essay” elsewhere in this Directory for further details). Eventually, Williams was connected with the editor of a weekly London newspaper, Answers, who took his manuscript and several photographs, reworked them into a tabloid style and format, then published them in a two-part series in early 1934.

The Williams photos in Answers are quite likely the first published photographs to provide a glimpse of suffering and genocidal policy in Ukraine to appear in the Western press.

The collection presented here contains the complete articles published in Answers on February 24, 1934, and March 3, 1934, along with the ten illustrations. Two are portraits of Williams – one formal, and one in laborer guise – and eight are photographs from his 1933 visit to Ukraine. Significantly, this collection also presents digitized copies of the original photographs from which the published illustrations came. These originals are archived in the WRHS Photograph and Print Collection, which supplements the Whiting Williams Papers, an extensive collection of Williams’ lifelong publications and correspondence housed in the Western Reserve Historical Society (WRHS) Library, Cleveland, Ohio. https://www.wrhs.org/research/library/


Access to the original photographs – essentially Williams’ snapshots as a non-professional photographer – offers not only technically more distinct images but in some cases restores important visual context that was cropped away in the published illustrations, but is needed to understand the full story of what was being portrayed in the original photograph. Also worth noting is that the original photographs have Williams’ own captions written on the backs, sometimes rather different from the captions appearing in the newspaper. Unfortunately, one of the closely cropped newspaper illustrations is missing its original in the Williams archives, which would undoubtedly have added valuable context and caption information. By contractual agreement, WRHS has provided high quality scans of the photographs for display in this Directory, for which we are most grateful.

As indicated in “Whiting Williams: a Biographical Essay,” Williams’ correspondence with publishers mentions an unspecified number of photographs from 1933, but it may never be confirmed whether those that appeared in Answers comprise the extent of his 1933 photos. The Whiting Williams Papers at WRHS include additional photographs from his visits to Ukraine. Most are undated but appear to match directly or by style and subject to photographs he took in 1928 and subsequently published with articles published 1928-1932. A few are harder to place and will require further research, although at least two or three are quite certainly from 1933. One of them is included in this Directory.


Notes
Shown is a letter of recommendation written by photographer James Abbe dated November 8, 1933 to H. Hessell Tiltman, the editor of a London weekly, Answers, on behalf of Whiting Williams. Of particular interest is the main central paragraph that explains the nature of Williams' article and why Abbe feels it didn't get published in the US.
Date of Original
1933
Date Of Event
1933
Subject(s)
Famine (Ukraine : 1932-1933)
Holodomor
Personal Name(s)
Williams, Whiting ; Abbe, James
Local identifier
PD219
Collection
Whiting Williams
Language of Item
English
Copyright Statement
Copyright status unknown. Responsibility for determining the copyright status and any use rests exclusively with the user.
Recommended Citation
Babij, Lana. Whiting Williams. A Collection Note. Retrieved from: http://vitacollections.ca/HREC-holodomorphotodirectory/3647458/data 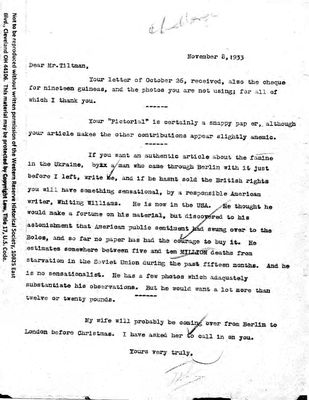