Media Type
Text
Description
During the 1921-23 famine in the USSR, Soviet authorities had allowed photographers unprecedented and never to be repeated freedom to document starvation and human misery on Soviet soil. Over the ensuing decade, the authorities decided that in order to maintain control and achieve their goals, they needed to carefully manage the image of the USSR, both for local consumption and the outside world. A network of agencies was created to manufacture a virtual Soviet reality which in the 1930s included the concealment and blanket denial of the Holodomor. Censorship and a variety of restrictions made the discovery, documentation and reporting of the facts very challenging, particularly for photographers, as we learn from written accounts and other records.
This contextual overview is followed by a description of the Directory’s “inaugural edition” in terms of the subject, geographical location, and time-frame of the photos selected and the featured photographers. The process of identifying and authenticating the photographs is briefly outlined, with some concluding remarks on future plans for the Directory. To view the full essay, refer to the PDF document on the right side of the screen.
Notes
Photo source: The James Abbe Archive. No. 1149. For further information about this photo, go to: http://vitacollections.ca/HREC-holodomorphotodirectory/3684747/data To see original, go to: http://vitacollections.ca/HREC-holodomorphotodirectory/3636396/data 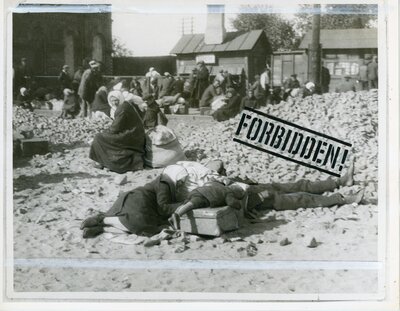