Media Type
Image
Item Types
Photograph albums
Photographs
Description
This image was published in How Firm a Foundation: A History of the Township of Cramahe and the Village of Colborne in Cramahe's Digital Archives (3bk), p.135. The caption reads: "Dr. W.A. Sargent on the sidewalk on King Street, East."

Argyris, Eileen. How Firm a Foundation: A History of the Township of Cramahe and the Village of Colborne. Erin, Ontario: Boston Mills Press, 2000.

Notes
Fifty-eight photos and fifty-six photo postcards originally comprised a photo album believed to be owned by Gertie Mikle of Colborne, Ontario. Some of the postcards were cropped, showing partial images. The back of the photo or photo postcard will be included if there is an inscription or any other contextual information. The photographs were removed from the original photo album and the original order of the photographs and the pages is unknown. 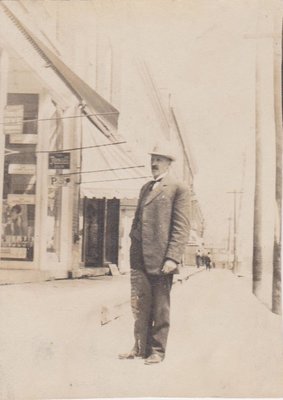 Comment on this item Create electronic postcard Full Image
Other Web sites/External links
How Firm a Foundation: A History of the Township of Cramahe and the Village of Colborne by Eileen Argyris
Home (Advanced) → What's New → Details
Powered by / Alimenté par