Another image was copied from Google maps street views - see the Pages box at top of this page and click the downward pointing select arrow to access this photo.

“For most conspicuous bravery, initiative and devotion to duty. When in command of an assaulting party Lt. Rutherford found himself a considerable distance ahead of his men, and at the same moment observed a fully armed strong enemy party outside a ‘Pill Box’ ahead of him. He beckoned to them with his revolver to come to him, in return they waved to him to come to them. This he boldly did, and informed them that they were prisoners. This fact an enemy officer disputed and invited Lt. Rutherford to enter the ‘Pill Box,’ an invitation he discreetly declined. By masterly bluff, however, he persuaded the enemy that they were surrounded, and the whole party of 45, including two officers and three machine guns, surrendered to him. Subsequently he induced the enemy officer to stop the fire of an enemy machine-gun close by, and Lt. Rutherford took advantage of the opportunity to hasten the advance of his men to his support. Lt. Rutherford then observed that the right assaulting party was held up by heavy machine-gun fire from another ‘Pill Box.’ Indicating an objective to the remainder of his party he attacked the ‘Pill Box’ with a Lewis gun section and captured a further 35 prisoners with machine guns, thus enabling the party to continue their advance. The bold and gallant action of this officer contributed very materially to the capture of the main objective and was a wonderful inspiration to all ranks in pressing home the attack on a very strong position.” (London Gazette, no.31012, 15 November 1918)
Subject(s)
Victoria Cross
Colborne, Ontario
World War I, 1914-1918
Local identifier
647ph
Language of Item
English
Geographic Coverage
Copyright Statement
Copyright status unknown. Responsibility for determining the copyright status and any use rests exclusively with the user.
Copyright Holder
Copyright, public domain: Cramahe Township Public Library owns the rights to the archival copy of the digital image.
Contact
Cramahe Township Public Library
Email
WWW address
http://www.cramahelibrary.ca
Agency street/mail address
6 King Street West
PO Box 190
Colborne, ON K0K 1S0 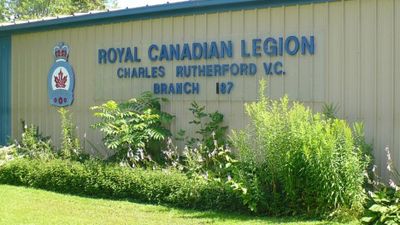