Full Text
No date.
Dear Girls:   Just a few lines to thank you very much for the cigarettes I received last night. Everything is going very nicely over here. Hope things are the same with you. For this time I'll say, Cheerio.
C. Bacon.

No date.
Just a few lines to thank you for your welcome gift of cigarettes I received today. Also for the ones I received while in Germany.
At present I am in England on my way home. I wish to thank you all very much for all the gifts you have sent me since I arrived overseas. I think you have done a very swell job. I will never be able to thank you enough. Will say cheerio now.
As ever,
Clifford Bacon


July 28, 1945
Cliff Bacon Visits Uncle on Furlough
Pte. Clifford Bacon, son of Mr. Percy Bacon, Saskatoon, Sask., and brother of the late Sgt. E.A. (Ted) Bacon visited with his uncle, Mr. Reg. Bacon in Lindsay Friday on his way back to western Canada after nearly five years overseas.
Clifford is well-known in Lindsay having worked in the district for some years previous to his enlistment and he had a grand time renewing his old acquaintances in town.
He arrived at Halifax aboard the S.S. ‘New Amsterdam’ and reports a wonderful sea voyage. The ocean was calm for the most part, he told the Post, and it was really a marvelous trip. The train trip inland was also very enjoyable and we were treated very well indeed by those in charge and by the various service clubs which had representatives on hand to welcome us as we came into the larger centres and speed us along the way with cigarettes, candy and etc.
A sister, Mae is still in the service of her Country as a member of the CWAC’s.
Pte. Bacon will soon be on his way to his stand-down depot at Regina, Sask.

Media Type
Newspaper
Text
Genealogical Resource
Item Types
Clippings
Articles
Description
Lindsay Boy Overseas - October 1944.
Notes
This card is part of a larger collection of World War II personnel clippings. The project began in 1944 at the Lindsay Library. The intent was to gather together as much information as possible on the military record and the service of people from the Town of Lindsay and the County of Victoria (now Kawartha Lakes)who served in the war. To that end, during the years 1944, 1945, and 1946, members of the public donated photographs and updated information about their loved ones. Both library staff and the public saved and donated newspaper clippings. Some of the files contain great amounts of detail, while others have just a name.
Date of Publication
28 Jul 1945
Subject(s)
Military service
Soldiers
World War II
Canadian Women's Army Corps
Furloughs
Women Soldiers 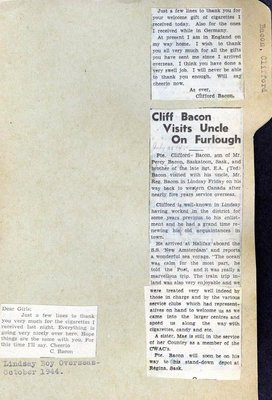