Full Text
August 16, 1944
Sgt. "TED" BACON PASSES FROM WOUNDS
Popular Young Athlete Died in France Following Wounds—Family Reside in Lindsay
A week or so ago word was received by Mrs. E. A. Bacon, Queen St. (Formerly Miss Jean Milburn) that her husband Sergt. "Ted" Bacon had been wounded while on active service in France.
Thursday official information was received announcing the young soldier’s death. He passed away two days after having received his wounds. Sergt. Bacon, who before enlistment was engaged as a watch repair man with his uncle Mr. Reg Bacon, Lindsay, was connected with the Technical stores in connection with small gun parts and was with the 7th Canadian Army.
Sergt. Ted Bacon came to Lindsay several years ago from Saskatoon, Sask. He attended school in Lindsay and was particularly fond of and adept at athletics. He was a member of the Collegiate Institute Rugby teams, a good ball player played tennis and hockey. His play was keen and fast and he had the reputation of being fair in all sports. "Ted" enlisted in Lindsay the second day the local recruiting station was opened in ’39 and after training in Lindsay, went to Petawawa and for some time was connected with physical training in the Camp.
Percy Bacon, father of the young soldier, lives in British Columbia. The young soldier is also survived by his wife and one young daughter as well as by his uncle, Mr. Reg Bacon, of Bacon’s Jewelry Store.
Media Type
Newspaper
Image
Text
Genealogical Resource
Item Types
Photographs
Death
Clippings
Articles
Description
Sgt. E.A. (Ted) Bacon of Lindsay, Ontario, paid the supreme sacrifice in World War II. Listed on the Honour Roll for Victoria and Haliburton Counties of those who have paid the supreme sacrifice in the cause of freedom. Died on July 27, 1944.
Notes
This card is part of a larger collection of World War II personnel clippings. The project began in 1944 at the Lindsay Library. The intent was to gather together as much information as possible on the military record and the service of people from the Town of Lindsay and the County of Victoria (now Kawartha Lakes)who served in the war. To that end, during the years 1944, 1945, and 1946, members of the public donated photographs and updated information about their loved ones. Both library staff and the public saved and donated newspaper clippings. Some of the files contain great amounts of detail, while others have just a name.
Publisher
Watchful Warder
Date of Publication
14 Aug 1944
Date Of Event
27 Jul 1944
Subject(s)
Death
Military service
Soldiers
War casualties
World War II
Royal Canadian Army
Normandy (France), Attack on, 1944
World War 1939-1945 Honour Roll
D-Day
Soldiers -- Wounds and injuries
Royal Canadian Artillery
56th Field Battery
Supreme Sacrifice 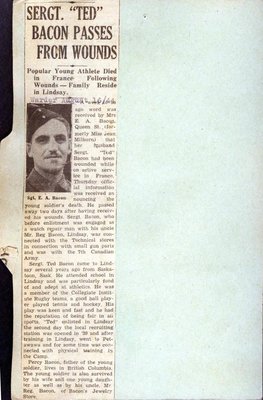